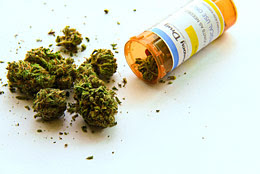 Glaucoma is a disease of the optic nerve, the cable that carries visual information from the eye to the brain. Damage to the optic nerve from glaucoma can result in vision loss and blindness.

Treatments that lower the pressure in the eye both lower the risk of developing the optic nerve damage that defines glaucoma, and the risk of pre-existing damage getting worse.


Despite the treatments available for lowering eye pressure, such as eye drop medication, laser treatment, and operating room surgery, there are some individuals for whom these treatments either do not sufficiently lower the eye pressure, or cause unacceptable side effects. In these situations, both glaucoma patient and physician look for alternative therapies.

One of the commonly discussed alternatives for the treatment of glaucoma by lowering IOP is the smoking of marijuana.

The idea that marijuana can be helpful in treating glaucoma dates to the 1970s. Studies conducted then showed that smoking marijuana lowered the IOP of people with glaucoma. As a result of this research, additional studies were conducted examining whether marijuana or its active ingredient, a compound known as THC, could be used to keep IOP lowered. This research was supported by the National Eye Institute, a division of the federal National Institutes of Health.

The research found that when marijuana is smoked or when a form of its active ingredient is taken as a pill or by injection, it does lower IOP. However, it only lowers IOP for a short period of time—about three or four hours.


This short period of time is a major drawback for the use of marijuana as a glaucoma treatment. Because glaucoma needs to be treated 24 hours a day, you would need to smoke marijuana six to eight times a day around the clock to receive the benefit of a consistently lowered IOP. Because of marijuana's mood-altering effect, smoking so much of it daily would leave you too impaired to drive, operate equipment or function at the peak of your mental ability.

Scientists are still exploring whether the active ingredients in marijuana may yet offer a glaucoma treatment. However, such developments require much more research and are many years from becoming a reality.