Did You Know That Artificial Eyes Exist? 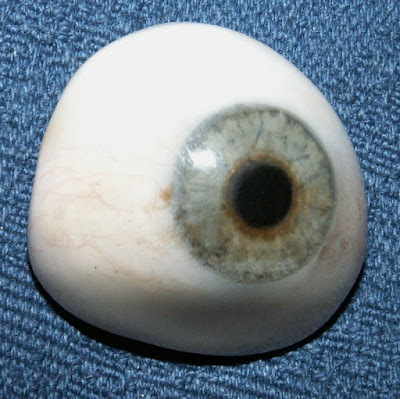 Have you ever heard of "Artificial Eyes" or medically called, "Ocular Prosthesis"?

Implanting a prosthetic eye (ocular prosthesis) is almost always recommended after an eye is surgically removed due to damage or disease. This implant supports proper eyelid functioning. The need for this may follow after an injury, glaucoma, eye infections and eye tumors.

What is this exactly? An ocular prosthesis, artificial eye or glass eye is a type of craniofacial prosthesis that replaces an absent natural eye following an enucleation, evisceration, or orbital exenteration. The prosthesis fits over an orbital implant and under the eyelids. Though often referred to as a glass eye, the ocular prosthesis roughly takes the shape of a convex shell and is made of medical grade plastic acrylic.

Artificial eye-making has been practiced since ancient times.  The first ocular prostheses were made by Roman and Egyptian priests as early as the fifth century BC.  In those days artificial eyes were made of painted clay attached to cloth and worn outside the socket.

It took about twenty centuries for the first in-socket artificial eyes to be developed.  At first, these were made of gold with colored enamel.  Then, in the latter part of the sixteenth century, the Venetians started making artificial eyes out of glass.  These early glass eyes were crude, uncomfortable to wear, and very fragile.  Even so, the Venetians continued making them and kept their methods secret until the end of the eighteenth century.

Presently, ocularists and eye surgeons have always worked together to make artificial eyes look more realistic. For decades, all efforts and investments to improve the appearance of artificial eyes have been dampened by the immobility of the pupil. One solution to this problem has been demonstrated recently in a device based on an LCD which simulates the pupil size as a function of the ambient light.