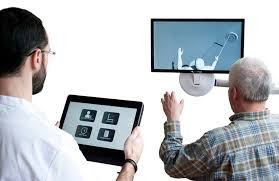 Among the newest therapeutic tools used for stroke victims, those most commercially available are robotic exoskeletons, which attach directly to the affected part of the body to facilitate or enable movement.


Robotic exoskeletons are well suited to therapy, since the support can be taken away gradually as patients improve, says Karen Nolan, a senior research scientist at the nonprofit Kessler Foundation, a West Orange, N.J., research and charitable institution for people with disabilities. Exoskeletons also may relieve physical therapists of having to manually move the patients, so they can focus on the quality of the movements instead, says Dr. Nolan.

Another approach, called telerehabilitation, aims to increase the amount of therapy stroke patients get by making supervised rehabilitation available at home—and making it fun at the same time. One system, developed by Steven Cramer, a University of California, Irvine, professor, and his team, integrates low-cost electronic videogame plug-ins, such as a Nintendo Wii remote-controlled gun. Users’ movements control the games, with remote supervision by a therapist.

“People get all freaky jazzed when they shoot the little ducky on the screen,” Dr. Cramer says. The system is in clinical trials to test its effectiveness compared with in-person physical therapy.

Videogame technology used in stroke therapy also includes virtual-reality systems, with some that render scenes and objects in 3-D. Some games with immersive environments may offer the greatest promise to stroke patients because they address cognitive problems along with sensory and motor problems, says Dr. Mindy Levin, a professor at McGill University in Montreal and president of the International Society for Virtual Rehabilitation.

While stroke patients often have physical difficulty with such basic tasks as shopping, everyday environments such as malls can leave them feeling overwhelmed as well. A simulation developed by Israeli researcher and occupational therapist Dr. Debbie Rand, called VMall, can help reintroduce patients to such environments in a low-stakes way by capturing the patient’s image and movements and placing them in an on-screen virtual mall, where they look for items on a shopping list.

Researchers are still determining how to match each patient with the technology he or she would benefit most from, depending on the nature and severity of the injury.