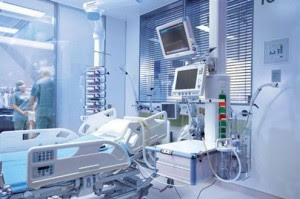 In the third-floor ICU of SL Raheja Hospital in Mahim, 15-year-old Sagar (name changed) wants to play on his mobile phone, but is unable to speak because a cancerous growth was removed from his lower jaw recently. So, he uses a special app on iPad to ping the nurse station: "I want to meet my mother." When his mother is called in, he pings again: "I need my mobile phone." A few minutes later, he gets a mobile phone without a SIM card to play.

Simple tech solutions that are now making ICUs friendlier places—and helping patients communicate with their families as well as the medical staff—worldwide have just reached the city's shores.

The Vocalizer for Patients app that Sagar uses is the brainchild of cancer surgeon Dr P Jagannath. It has visuals with voiceovers for around 60 situations in ICU. "Many patients here have an endotracheal tube that takes away their ability to speak even though they are conscious. Many surgery patients too cannot talk on the first day after surgery,'' said Dr Jagannath.

"Some patients feel very cold but are unable to indicate so. Some others want to turned over or their back is itchy,'' he said. It is to help these patients that Dr Jagannath's NGO, Crusade Against Cancer Foundation, funded the project.

It is well-established that ICU patients suffer from ICU psychosis, said intensivist Dr Khusrav Bajan from Hinduja Hospital, Mahim. "Every effort must be made to help them communicate," he said, adding that many hospitals have devised methods such as pre-written notes to help patients.

Dr Sanjith Saseedharan, who heads the ICU at SL Raheja Hospital and has worked on the Vocaliser for Patients app with Dr Jagannath, said he plans to use four more iPads in his unit soon. "We began our trials six months ago with a 21-year-old patient, Sunil (name changed), who was diagnosed with Guillain Barre syndrome,'' said Dr Saseedharan.

Sunil, who was studying for his MPSC exams, suffered such an intense attack that he couldn't talk or walk. "I was in hospital for 75 days, of which 45 days was in the ICU with ventilator support. I could only move my fingers and my eyes,'' he told TOI. He became the first to use the app, communicating with his parents on the need to change sides or feeling cold.

"As the app is available for free download, families can use it on their own tablets (both iOS and Android) to communicate with their ICU patient,'' said Dr Jagannath.