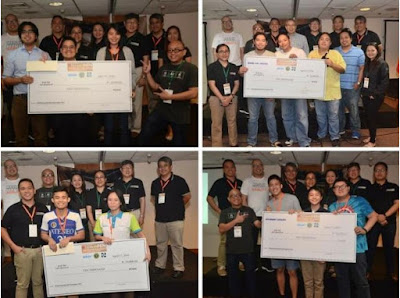 The Philippine public health system have come a long way. This writer remember stories told by grandparents who had brothers and sisters, parents and relatives who died of cholera, typhoid and dysentery. This was a time wherein there was no piped water and there was open sewage.

The breakthrough came when clean water was provided and a sewerage system was constructed. In  an urbanized community, wherein there is a dense population, such infrastructure is one of the basics of public health.

Now it is still a health concern since population pressure in the urban areas continues unmitigated. Also, infrastructure development is still very much wanted in rural and remote localities.

With these in mind, a group of students from the University of the Philippines (UP)  is trying to address this health concern via their mobile device and application. This device and app won first prize at the #thinkOPENhealth Hackathon for Health that was held last April 16 – 17, 2016 at the Asian Institute of Management. The group won Php100,000 in cash and various gadgets for their entry.

Physics students from UP, called Quantum Hackers developed and created a device that analyzes the quality of water. This was done in Hackathon manner within 24 hours. Norman Mascarinas, Kit Guial and Junel Bagcong came up with a user-friendly device and app that has sensors that can test for water quality such as salt content and turbidity (clearness from particles). It is called Shine Herald.

It is a product with remote and far flung areas in mind wherein a barangay official need only push a button to conduct tests on water quality. It can then be transmitted to the Department of Health (DOH) and the Department of Science and Technology (DOST) where sensors can be installed for water quality monitoring.

The inspiration came from Guial’s sister who is a nurse and have experienced medical missions in such areas wherein water quality has to be assessed first and tends to me a tedious process. Water from the area needs to be brought to a laboratory in Manila for analysis.Then can only the health professionals go to the location and conduct the medical mission with the data and information at hand.

“Our goal is to identify which rural areas have polluted water which could lead to diseases. We want to equip barangays with affordable and easy- to-build instruments. The locals can test and assess water quality themselves. They just have to submerge the probe into the sample,” said Mascarinas.

“As a startup, we could deploy to rural areas these devices with the help of the DOH. Many of these places are not easily accessible to government agencies. We want to automate the entire water testing and analysis process,”  Bacong disclosed.

“The portable Shine Herald device, which cost just P4,000.00 to build, has a microcontroller that acts as its CPU. We wrote a program that can generate a message of 140 characters, very much like the maximum characters of a text message,”  according to Bagcong.